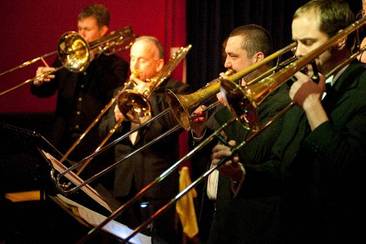 Consisting of four trombones, with more if the occasion calls for it, the Mel’Bones play music from many eras. Solemn music from the days of Giovanni Gabriele and St Mark’s church in Venice, through madrigals and part-songs from the 16th and 17th centuries and Bach chorales, into works from the great classical composers like Joseph Haydn, and onwards through the 20th century with suites by composers like Peter Atherton and arrangements of songs from the Great American Songbook and tunes like ‘Trombumba’ with a latin beat. We also have a library of Christmas carols that sound really nice on trombones. Our music suits both indoor and outdoor occasions; provides a wonderful addition to church services; can add delightful and new sounds to occasions like weddings; and is welcome at concerts, festivals, fetes, school family days, picnics, race meetings and many other events.

We need no electricity supply (except for very large venues and, perhaps, outdoors on some occasions) and are able to easily move around to different areas in a large venue like a park or racecourse.

The unusual instrumentation gives people a pleasant surprise when they hear what we sound like – always a great talking point at an event.

Please contact Don to discuss your needs, our availability, fees and expenses, and the repertoire you would like from the group.
Outside St Paul's Cathedral, Melbourne
Saturday 19th December 2020 at 5.00pm​

Fourteen trombonists gathered outside St Paul's Cathedral in the Melbourne CBD to play a set of Christmas carols, plus "76 Trombones" and "I am Australian". Appreciative applause and comments were received from listeners and passers-by. 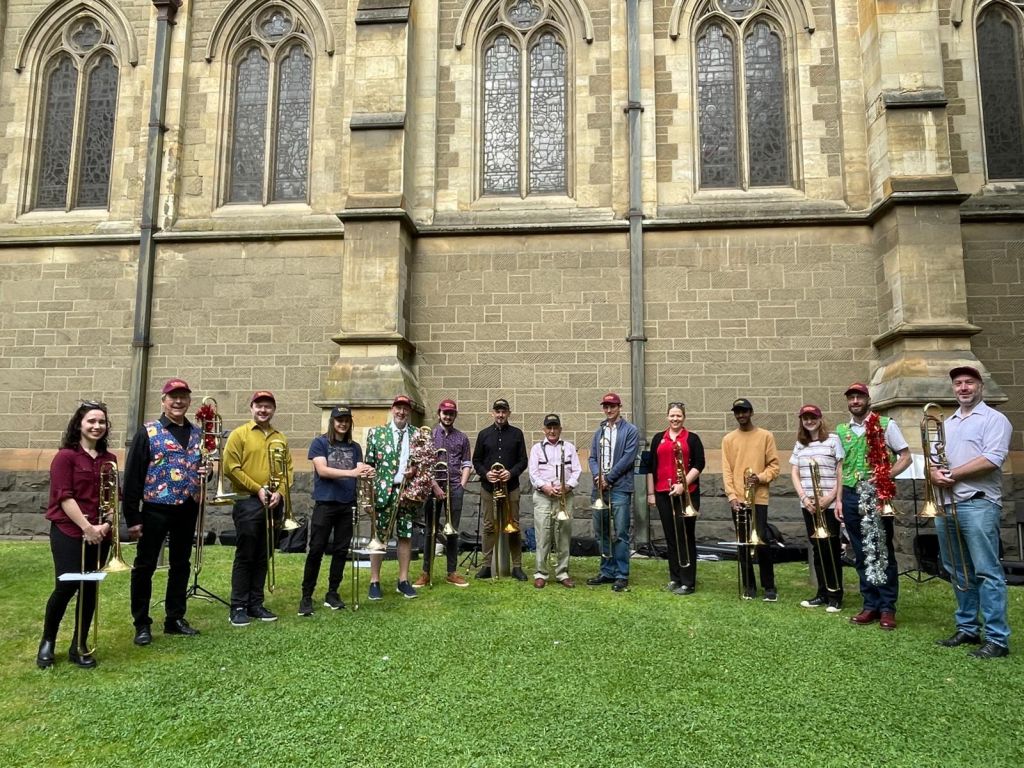 Seventy-six fine trombone players gathered in Federation Square, Melbourne, to play "76 Trombones" from the 1957 musical "The Music Man", followed by a program of Christmas music. There were trombonists aged from 16 to 71, two coming from Ballarat and one from Hobart, Tasmania. Some wore festive clothing and many decorated their instruments (and themselves) with flashing lights and tinsel. Brian Ebert of OzWinds had generously given financial assistance with the provision of embroidered caps in two colours, which have become coveted souvenirs of the event.

We began by marching across the Square playing "When The Saints Go Marching In" while a photographer from "The Age" newspaper took pics. Onlookers immediately reached for their phone cameras and took shots of this amazing sight. Drinkers in one of the bars joined in singing the words, and the atmosphere immediately became very festive. 40 music stands had been set up on the stage, and the players took their places behind them. I set up a music stand about 10m in front of the stage, and we were off.

After "76 Trombones", we played "Frosty The Snowman", "Hark The Herald Angels Sing", "Do You hear What I Hear?" and "O Come All Ye Faithful". Then twelve players performed Leroy Anderson's "Sleigh Ride" in Bob Elkjer's great arrangement. They sounded superb. We then went on with "Jingle Bell Rock", "I Saw Three Ships A-Sailing" and "Joy To The World". Bass trombonist Damien Hort had worn his kilt and brought his bagpipes and suddenly appeared playing "Amazing Grace" as he made his way to the front of the stage. The trombones then joined in for two more choruses in a performance that drew huge applause from the audience.

As the players left the stage, the buzz of enthusiasm and the elated looks on their faces eloquently indicated how they felt after this unique performance. Everyone was asking "When can we do it again?" I can't wait for that to happen (although it's up to me when that is) because being out front conducting, I was wishing they could all be out beside me hearing the enormous, warm, exciting sound they were making together, and enjoying the wonderful spectacle of 76 trombone players in full flight. It was a performance to be remembered for a long time, and I thank them all for their enthusiasm and willingness to join in.

Here's the link to the online "Age" report on the event:https://www.theage.com.au/national/victoria/don-leads-the-other-75-trombones-in-their-festive-fed-square-parade-20191212-p53jdh.html?fbclid=IwAR1oiXexszFwMTy6TjZN5ANmNBFTiVbwgHLIlyWXzSC2mQKmkGwf9qsFD6w 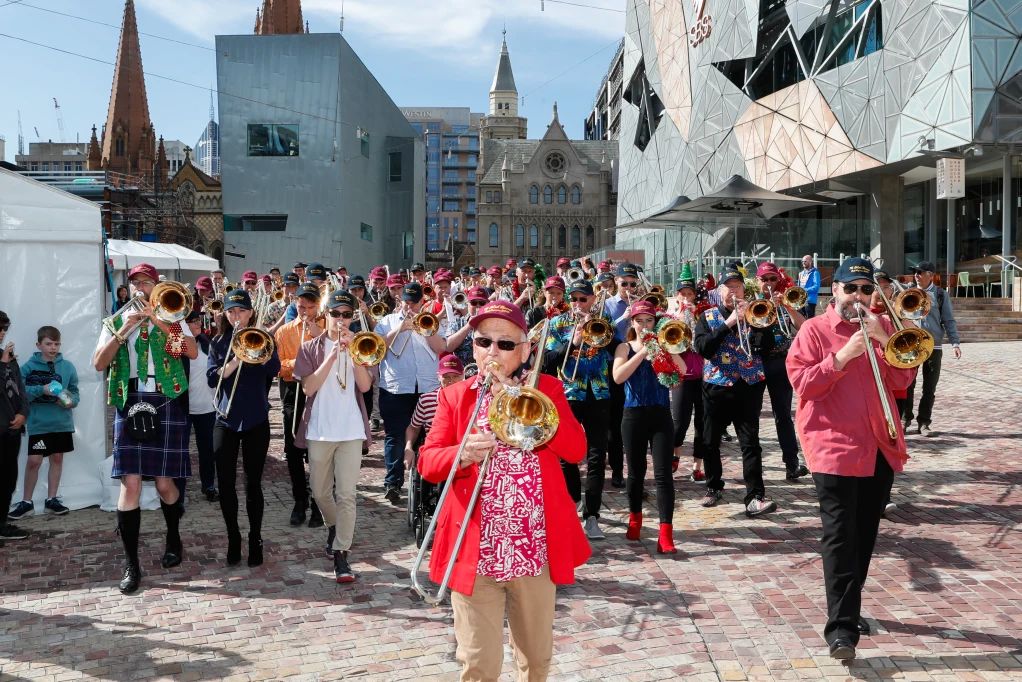 The Mel'Bones Trombone Quartet won our section playing Peter Atherton's Quartet for Trombones (1967). This is the first time the quartet has placed first as we've usually found ourselves in second place. So we're very pleased at the result. Thanks go to Sean Smyth, Luc Weiner and Nikola Shaw for their sterling playing.